Home / Stories / Adoption Story: Guinness!
January 20, 2021January 20, 2021
By Laurie HarttIn StoriesTags adoption, cat
In fall of 2020, our sweet little kitty Danny (now “Guinness”) met his furrrrreevr home! He went to two of the most wonderful adopters we’ve ever met…and here’s his story!
1. Name of your cat: Arthur Guinness Ziggy Powers (but he goes by Guinness or Guinn-Bin)
2. When did you adopt him/her: August of 2020

3. Why were you looking for a cat: We already had one cat, Torpedo (also from the CCC) but he was being lazy and getting chonky and we figured he might want a friend. We also just felt like adding another cat to the family would be fun! When we met Guinness (AKA Danny at the time), he seemed a bit shy but loved jumping on our lap for pets and treats. We just knew Danny was the one!
4. What drew you to this cat in particular: How sweet he was. He was a little bit shy, but when I sat down and patted my lap, he hopped right up!
5. Why did you choose this name: Last year, we traveled to Europe for the first time and fell madly in love with Ireland. Since he’s a little black and white cat it was only fitting to keep up with the beer-themed cat names (Torpedo is a Sierra Nevada beer), and Guinness just fit perfectly. Arthur Guinness is the guy that started the brewery, Ziggy is for his stripe on his face reminiscent of the lightning bolt David Bowie is known for, and Powers is the name of our favorite Irish whiskey. 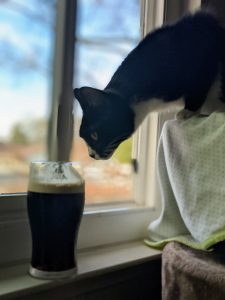 7. How has your cat adjusted to the newly adopted life? My goodness, my Guinness! He loves his new home. He is a lap-cat like no other and he’s so warm! He loves laying on our legs every night as well. 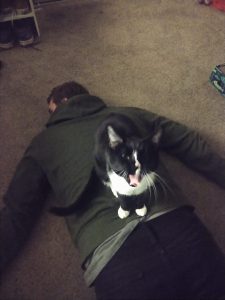 8. Does he fit in well with the family? Yes! Both his humans love him to pieces. His big brother, Torpedo, didn’t know what to think at first, but now they play-fight all the time. It’s like a herd of elephants running throughout the house sometimes–it’s hilarious!

9. What are his favorite toys? His catnip banana! He’s obsessed with it and rubs and drools all over it. Also, strings and anything string-like, of course! 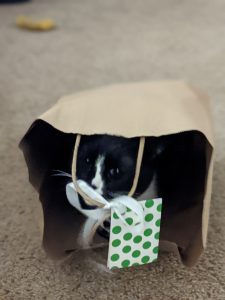 10. Favorite snacks? He likes temptations and Greenies, but he’s pretty polite with his treats (unlike his brother, who will literally climb on/push away Guinness to get to treats, hahaha)
11. Anything he doesn’t like? For being a bit of a scaredy-cat, his curiosity always tends to win him over. I’m surprised that not much actually scares him, even things like the vacuum!
12. Any funny stories? – He is SUPER talkative! We thought he would be fairly quiet, but I’m pretty sure he just likes the sound of his own voice! He also carries on conversations when we talk with him; it’s adorable! He also has so many dog-like tendencies–we joke he was raised by dogs. He does a “splat” where he lays out flat on the ground before pouncing on things, too. He’s got quite the silly, playful personality! 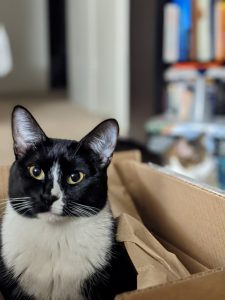 13. Anything else? We love the crap out of him LOL! So thankful for the CCC and all that they did for us and continue to do for the kitties in the area. You are an amazing group of volunteers!
1Amber’s Adoption StoryAdoption Story: Minxie!